- August 23, 2011
The other day while I was taking a shower, I heard Little T screaming and crying, and carrying on to beat the band. All the other kids were home, but they all -- to a kid -- ignored her.

Alarmed, I rushed out of the shower, wrapped myself in a towel, and ran still dripping into her room, where I discovered the problem. She had been reaching into her Elmo suitcase, when somehow, she fell over on top of it, onto her bed, with her arm still in it. The weight of her body made it impossible for her to pull her arm out of the suitcase, and the zipper was biting into her arm painfully. Trying to push herself up off of the suitcase and the bed made the pressure on the zipper-trapped part of her arm hurt worse. She was stuck. And pissed.

Today, Lady E had a friend over, and while the two of them and Little T played in their room, I took a shower. The playdate friend's mom arrived before I got out, and here's what greeted her:

My 12 year old son barely looked up from the computer screen to tell her that we (everyone else in the house) were all next door at the neighbor's house. Sensing this might not be true, she ventured upstairs and found the girls in their bedroom. The older two bolted, as kids who do not want a playdate to end are wont to do, leaving Little T behind. Why didn't she chase after them?

Because apparently, she had climbed up the over-the-door shoe hanger, gotten her feet jammed into two of the pockets, and then fell backwards in such a way that her feet were completely tangled and stuck in the pockets. This time, she wasn't screaming or even upset in any way. Just hanging out on her back, with her legs stuck up above her and her feet tangled in the shoe pockets.

The visiting mom extricated her. At least no one was dripping on her when she was rescued this time. Once freed, she promptly climbed into the kitchen sink to get a drink of water. See? She does play like a monkey! 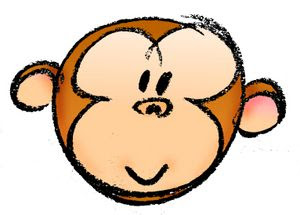 Showers are starting to scare me.