Showing posts from May, 2008
Show all

- May 27, 2008
I made a promise to my son yesterday, in an instant, without giving it much thought. It was Memorial Day, I was making breakfast for everyone, and he was whining. He was being incorrigible , as a matter of fact. He was despondent because he was bored, and he didn’t want what I was cooking, and why couldn’t he have some licorice, and why didn’t he ever get to do anything fun? He can muster up the foulest of moods at times, and this was one of those times. I, on the other hand, was in a strangely light-hearted mood. Perhaps because I recently got a four-day hiatus from being a mom…perhaps because the night before some friends had us over for dinner and pampered us like nobody’s business…perhaps because I have been getting just slightly more sleep than usual lately. Anyway, in a uncharacteristic burst of optimism, I told him that I was going to stay calm and cheerful no matter what he said to me; I wouldn’t let him whine without sending him to his room, but I would not yell, and
4 comments
Read more 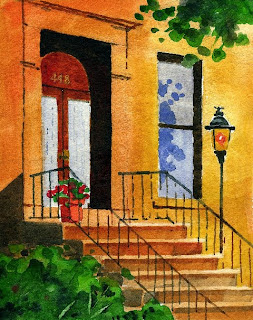 Do the wonders of my family never cease? My dad painted this picture of the house some of our family stayed in during our trip to NYC. I especially love the window to the right and the greenery at the bottom left. While a bunch of us slept elsewhere, this place was "home base" for all of our festivities. He captured our home-away-from-home perfectly. Since he has retired, he has returned to watercolor painting. He has always been an artist; in fact, he was a professional potter for much of my childhood and I was well into my teens before I realized that some people actually purchased the dishes they ate off of. I have many fond memories of running around at street art fairs in San Francisco, dodging in and out between tables of hand-crafted jewelry, tapestries, pottery, paintings, etc. It was a great way to grow up, surrounded by people who take in the world and give something beautiful -- or at least interesting -- back. Between my artist father and my writer moth
1 comment
Read more

Re-entry is a Bitch

- May 21, 2008
First off, thanks to Laura for the fantastic post title. She took one look at me this morning on the schoolyard and came up with that gem. And it sure is, peeps. I had a fantastic time in New York with my family. That is to say, my extended family. I traveled to the Big Apple for my brother's nuptials, and left Rick at home with 5 children on perhaps THE busiest weekend we have had ever. He had to do the following: Friday: First off, get everone to school and daycare, usually my gig, and then pick them all up in the afternoon, also usually my gig. Get 7-year old to 5 pm baseball practice Get to 5:30 soccer practice for 5-year old -- he's the coach as well! Saturday: Get 9-year old to his baseball game by 7:45 Get 5-year old to her soccer game by 8:30 Dash over to baseball game to try to make 9-year old's pitching debut Take the entire family to an End of the Season soccer potluck Drop off two youngest at Saint Nicole's for an evening of babysitting Take the olde
Post a Comment
Read more

- May 07, 2008
...because a pack of wild monkeys keeps piling on top of me and shoving me further down into the leaves and muck and mud and loamy earth. 5 monkeys, to be exact. I am utterly floundering here. My house is a disaster. There is no food in the house. The laundry is threatening to fall over on top of me or one of my offspring. I'm late with school paperwork, daycare paperwork, movie rentals. I am behind on my freelance work projects. I am behind on Garden Design business work. I cannot trust my own calendar, so I live in fear of whatever I am forgetting. I need to plan a 1st Communion shindig...in two days. I have to write a letter of recommendation for a colleague seeking a special award. I am helping produce the 2nd grade contribution to the annual auction in a week and a half. I have a sick child. I am potty training another child. We have baseball practices and soccer practice and games to coordinate. Birthday parties to attend. Mother's Day to acknowledge. A
4 comments
Read more

You know you have a big family when...

Time for the Natives! And I do not mean the children. Rick and I run our own native plant garden design business. And this weekend is the annual Garden Tour we are lucky enough to participate in. So I won't be posting anything until after Sunday, but for those of you interested in learning more about native plants, their advantages, and their beauty, check out the Bringing Back the Natives Garden Tour website. Better yet, come on the free tour! Online registration is closed, since the tour is this Sunday, but there are several walk-in registration sites, including our own garden. It's a truly wonderful event...a fantastic way to spend a Sunday. I'll be back after the tour!
2 comments
Read more
More posts