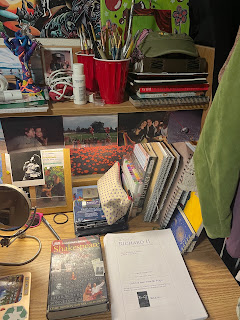 Outside my window,  the sky is piercing blue, the air is sharply chill. The planting beds are heavy with recent rains and replete with weeds that I should be pulling. I am thinking about many many things: Aren't we all? I'll share the first five I can think of. (1) the stupid pandemic and how radically it has altered all of our lives; (2) the pile of laundry I need to get through; (3) my goal (at work) to raise $375,000 this year from individual donors; (4) the three large manual typewriters on my dining room table that have been there for two weeks (rendering the table unusable) and how I want to sell them so I can get rid of them and so I can use my table again; (5) the fact that I can never seem to get up early anymore. I used to get up at 6 or 6:30, and now I can barely crawl out of bed on the weekends before 9 or 10. Is it the cold winter weather? Is it the pandemic?  I am thankful for the beignets my husband brought home this morning for all of us to enjoy, from Devils Te
Post a Comment
Read more 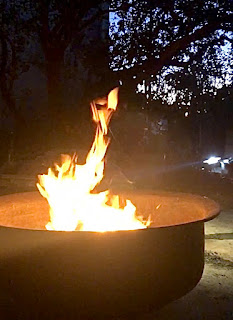 From the flagstone in the far corner of the garden All I see are flames leaping from the copper pit and Manzanita branches, sketching dark lines against the not-yet-night sky. I’ve been sitting here for hours, finally just sitting, Letting night descend, letting plants seep and mingle into darkness. Listening to the irises and the ribes. The dog runs back and forth, shimmying in the November air, Tearing through fallen leaves, Dancing in the disappearing light. She has taken over for the bees, dashing from plant to plant while they sleep and wait for the sun to rise again. This patch of earth and stones and trees and grasses, Is ours. Our place apart from concrete and cars, electrical lines and insatiable billboards. Our place to sit, to stare, to listen. At rest in a world of bees and flowers and shifting light.
Post a Comment
Read more 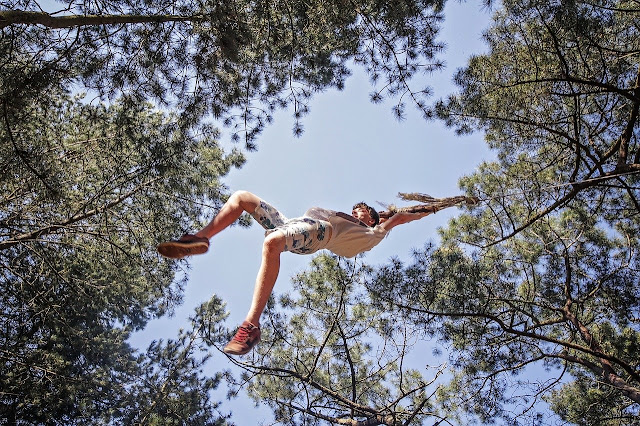 Image by  bednuts  from  Pixabay Near the far end of the back forty, Off to the right, A space opens up in the brambles that line the creek. He swishes through high grasses to the opening and enters.  From the top of the slope, he can see the rock slab at the water's edge and the thick worn rope hanging from a branch stretching across the creek.  He climbs down to it, reaches out, grabs hold.  The sturdy length gives him enough slack  to pull it all the way back up the slope. The worn path at the top makes room for two or three steps before push off.   He flies through the summer day. Air rushes by, smelling of dust, heat and dry grass. He feels the rough hew of the rope in his hands;  It catches the grooves of his calluses, promising to hold on. He glides back and forth, again and again, Over the sweet blackberries on the slope, Over the water tumbling across the creek bed rocks.   This is not the day the branch will give way and snap,  landing beside him with a crack on the har
Post a Comment
Read more

Knuckleheads, Home From the Dance

My parents were the cool parents: they let me drive around in our sleepy one-horse town before I was officially licensed. Emphasis on sleepy. Nothing ever happened there, so they figured nothing would ever happen to me. And they were right...until they weren't. Until one night at 2 am, when my friend Samantha and I returned home from a dance in the next town over. No, they had not let me drive that far, but they did say I could take Samantha home once the friend who had driven us there dropped us both at my house. So we had enjoyed the dance and then a party afterward–no alcohol for me–and then arrived back at mom and dad’s.   We hopped in the orange and white Volkswagon van I learned to drive on and headed across town. She lived up in the hills, relatively far away (but still: sleepy town, nothing going on, you get the idea). I had never actually been to her house, so did not know that she lived at the top of a very long, very steep driveway. We pulled up to the bottom, and I pond
Post a Comment
Read more

Sleepless in the Kitchen 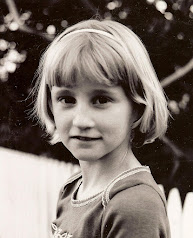 From her perch on the landing at the top of the stairs, she listened to the grown ups enjoying their dinner. Between the three couples, several courses, and many bottles of wine, there was a lot to listen to. With the nubby orange-brown carpet beneath her and her pink flannel nightgown pulled tight over her knees, she reveled in every minute of her eavesdropping. They talked about small town news: “Did you hear that Jim is drinking again? I don’t think Susan will put up with that anymore.” About the upcoming election: “Will you be at Kathy and Bob's election night party?” “Of course! We wouldn’t miss it–can’t wait to see Reagan lose!” About their kids: “Yeah, we tried telling him not to go out, but what can we do? He’s a teenage boy, and he’s just not listening to us! Little bastard!” Sometimes they laughed so hard the walls shook, their voices building off of each other and blending in raucous shouts that filled the whole house. She loved listening to them like that: happy parent
Post a Comment
Read more 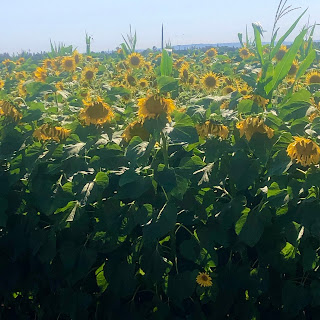 Outside my window : there is a hazy blue sky that cannot decide if it is presiding over an uncomfortably hot day or a strangely cool one. I am thinking about : my job. I work in development and communications for a charter school network, and the summer is always a time of reflection and planning. What did I and my team do well last year? Where can we improve? Remember the beginning of each new school year, when you had sharp pencils, fresh binders, and big plans to "be better" this year? Working for a school system means that I still have that experience. The big plans part starts early...that's what's on my mind these days. I am thankful for :   the beautiful game. We had an epically long, hot weekend of soccer with our youngest child, a weekend like we haven't had since before the pandemic.  Between Thursday night and Sunday night, we traveled many miles, ate lots of takeout, watched 320 minutes of girls pounding up and down the pitch, took one dip in a hotel
Post a Comment
Read more

A strange combo, to be sure.  Read on. When I was thirteen years old, I got my first job working at a deli market.  Two doors down from Sonoma's historic plaza, the deli was a popular lunch destination for all kinds of people: shop workers, construction guys, tourists, and laborers. Jim, the owner who hired me, was a great boss.  He was the picture of decorum during business hours, until the older employees went home and the teenagers were left to close up. Then, he would swear like a sailor–always in jest–to horrify and entertain us. We loved him. The "older employees" consisted of three or four women who became like a whole fleet of grandmothers to me. They were good country folk, hard-working, no-nonsense women who taught me how to make egg salad, prepare all the sandwich fixins, and slice deli meat on the giant electric slicer. They teased each other, but not me: they were strong, plain, kind, and funny. Shone's Deli is also where I met Ann, the best friend a soon
Post a Comment
Read more
More posts

THE 5 I AM RAISING

Making Me Dizzy In More Ways Than One

Please do not reproduce, publish or use photographs from this blog or reprint my words without my permission. Want something? Just talk to me. Thank you.