I played a little basketball, and my most vivid memory of that experience is that there were not enough black uniforms for all the girls on the team, so I wore a black leotard instead. That was fine with me.

I played a little soccer, and have no vivid memories of that whatsoever.

I played some Little League baseball, and I remember two things. First, my sister and I were on the team with our two best buddies, twins Jennifer and Heather. The four of us had a great time, mostly centered around eating as much candy as possible without getting caught.

And second, I remember my hit. Yes, my one hit. It was near the end of the season, might even have been the very last game, and I was sick and tired of striking out. My skinny little 8 year old self decided I was hittin' that ball, no matter what. At my next at bat, I stood there thinking about all the batting advice I'd ever heard, about watching and waiting for the right pitch, keeping my eye on the ball, having the proper stance and swing. I swung and I missed. Twice. And then a ball was coming towards me, way too high, not in my strike zone at all, and in a split second, I decided I didn't give a hoot, I was going to hit that thing. So I raised the bat straight over my head, elbows pointing to heaven, and karate chopped with everything I had. I hit the ball and it was wonderful. Terrible, awful form, the very antithesis of perfect execution, but I made contact. Running to first base was like flying. In my decidedly unreliable memory, the crowd went wild, and I felt like a star.

Alas, it ended there. I didn't play Little League the next season, and I didn't care. I could eat candy with Jennifer and Heather any old place, and I just wasn't a natural athlete.

My daughters, on the other hand, are competitors. All five of my kids are already athletes, with four of them playing soccer and Little T playing at life, which for her is pretty much a contact sport she intends to win.

What I love about sports is how much it can teach a kid about life in general. And not having experienced this as a child, it's like I'm figuring out sport for the first time. Soccer provides so many fantastic opportunities for us to talk to the kids about life, hard work, devotion, team-work, committment, sportsmanship -- you name it and we've talked about it in the context of sport. (We tease Rick that he can make soccer a metaphor for anything. But it's true, he can because it is.)

And it is a particular joy to watch my girls play, and play hard. I love that they know what it's like to be strong and aggressive, to challenge themselves physically. I love that they will grow up with this as a norm, as something as natural to them as the endless artwork they create at the dining room table. And I love watching them play.

The other day, we got the girls some t-shirts that capture their love of sports. Lola made her own version at the dining room table that night: 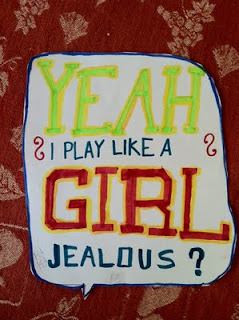 It's perfect for my girls, but it turns out it's perfect for so much more as well! A day or so after we got the shirts and Lola made the poster, I was talking with a friend about a difficult conversation she needed to have with a guy (see what you put us through dudes?), and out of my mouth came the perfect advice: "Play like a girl!" In other words, be tough, because you know you are.

So it turns out that my daughter's t-shirts are teaching me a thing or two about life.

Don't want to tackle my to-do list?
Feeling daunted by raising my teenager?
Unsure how to get that next project done?
Lacking a little confidence?

Play like a girl, Mama Monica! Get in there and play hard! You can do it! Take 'em down! (Sometimes, that last one is truly necessary.) I think we big girls need to make that our new mantra, our new rallying cry. It's all in there, all the courage and confidence anyone could ever need.

Looks like I need to go back to Target and see if they make those shirts in adult sizes.

words to live by

Mama Mama Quite Contrary said…
I think you and are share a little league, candy-eating symbiosis.