We went to the Boo Fest Halloween soccer tournament in Sacramento, and saw lots and lots and lots of minions.  Mine was the best, hands down, and I am so totally not biased.  It's just a matter of objective fact.  Of course, she had the advantage of possessing that "Minion Personality" before she even donned the costume; those other minions, the ones who merely put on a persona, didn't stand a chance.  This minion was made for the role.  Which pretty much shines through, don't you think? 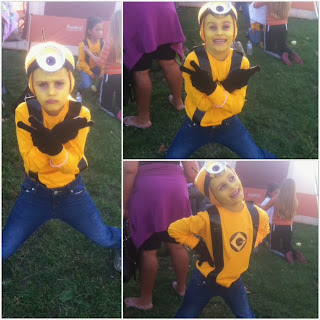 And really, most of the time, when she talks, this is all I hear anyway:


The best part of this costume is that the Uber Crafty Creative Moms on her soccer team made it.  Prior to the tournament, she wanted to be Wheezy, the squeaky and neurotic penguin from Toy Story.  But with only a few days left before Halloween, I had nothing on hand to make that happen.  After spending some frantic minutes searching for easy-to-throw-together penguin costumes online, I had resigned myself to a trip to Michael's and some time with a glue gun.

But lo and behold, the Boo Fest did come into my life, and the Uber Crafty Creative Moms did bestow upon my child a fully functional, fully kick-ass Minion costume.  In my best, most enthusiastic, most cheerful and "hey, I got a GREAT idea" voice, I suggested maybe she wanted to be a minion instead of a penguin?  Like, HOW FUN WOULD THAT BE?

Totally worked, natch.  She played right into my hands, and I didn't have to do one single damn thing to send her off in style to her school Halloween parade or to trick or treating.  Score!  Thanks Uber Crafty Creative Moms!

Her brother pointed out to me that between her well-established penchant for destroying the house and her two days of barfing this week, she could have also made a very convincing Wreck It Ralph.  But the minion is way cuter.

No matter how far ahead she plans, I will always be a last minute lucy, hoping for some Uber Crafty Creative Moms to save me.

And now, it's time to raid the children's candy stashes for Snickers bars…