It Appears We Have Angered the Soccer Gods 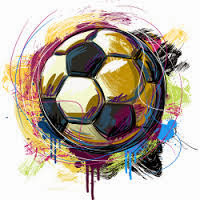 I got up at 5am to do soccer uniform laundry, and then left the house at 7:15 to drive one hour to Lady E's early game.  I then spent the day first in freezing cold, then in sweltering heat, then finally in balmy blessed overcastness (thank you California autumn), watching four straight soccer defeats in a row, two for Lady's E's team, two for Little T's.  They were frustrating games to watch.

Elsewhere in AIRY5-land, my other daughter's team lost, and one of my son's barfed on his soccer field.

The soccer gods must be angry at us.

I don't know what we did, or didn't do, to bring down the wrath of Pele, but today we were definitely cursed.

The good news about being a totally nutso soccer family, though, is that each day brings with it new chances to bring home a victory.  Tomorrow actually brings SIX more chances for victory...although if that barfer referenced a few paragraphs up doesn't get better, the number shrinks to 5.  Not that I want the kid to keep barfing, but...well...silver lining and all that.  In case you are counting, this means that between our five children, we have a grand total of 12 games this weekend.  Plus one more that Rick is coaching for a team none of our kids play on.

The craziest part of that crazy schedule?  I kind of like it.

Here's hoping we have a bit more success tomorrow.