Am I the only person who is completely baffled by the Snuggie? 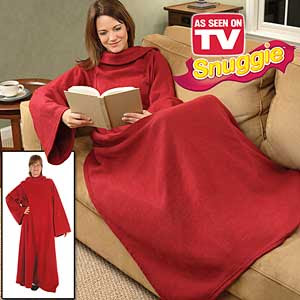 I cannot believe these things are catching on, that anyone would actually wear one. I saw a commercial the other night that excitedly proclaimed that the Snuggie is now available in fashionable patterns. Aside from the fact that Snuggie commercials look like they're spoofs of real commercials, the patterns featured were hideous, as in ugly drapery hideous. But then, I would imagine it's difficult to make any pattern look good when there is so MUCH of it to see.

Understand that I hate being cold. My poor husband has to hear me bitch and complain about being cold for the entire winter. I think I utter the words "I hate being cold!" about 53,000 times each year. I am always tucking blankets around my ankles and shoulders, and searching for the warmest socks, and going to bed wearing a hat. I put a high value on being warm and comfortable.

Even with all of that, I just can't get my brain around the Snuggie. A blanket you can wear belongs in the category of "Just Because You Can Do It Doesn't Mean It's A Good Idea." There are many things possible in this great big mixed up world of ours, but possible does not mean advisable. Dogs can lick their backsides, but does anyone really think they should?

So maybe the Snuggie doesn't rise to that level, but still: just because you can drape your entire body in a great big thick curtain with sleeves, doesn't mean you won't look like a complete fool while doing so.

The Snuggie website promotes the many ways one can use the Snuggie, such as for night time pub crawls. Can you picture this? Out with friends for a night of drinking wearing...a snuggie? Nothing says fun like wearing a comforter!

The site also has a picture of a bunch of people sitting in the stands at a football game all cozy in their snuggies. One of them is a young guy, who is probably thinking to himself, "I know you gotta put up with a lotta shit to make it in show business but if this ad kills my career, I'm gonna have the stupid Snuggie to thank for the next 30 years I spend flipping burgers." You know he wouldn't be caught dead wearing one of those things if someone wasn't paying him to. Plus, and maybe it's just me, more than one person wearing a Snuggie looks a little Orwellian, like some kind of strange mind-control experiment. Like this: 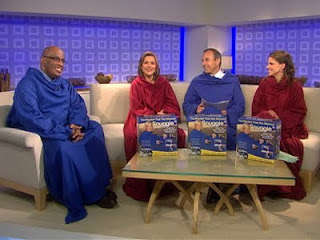 Don't they sort of look like mouthpieces for the state? Then again, if it's on the Today Show, then the Snuggie truly has arrived in our culture: it's here to stay apparently.

The most baffling part? More than 4 million sold in just three months. 4 million people who don't mind looking completely and utterly ridiculous? I am stunned.

But the absolute saddest part of this whole post is that I just spent 30 minutes of my life ranting about the Snuggie instead of doing laundry, washing dishes, feeding children, reading to the children, planning for Christmas, ending world hunger or sleeping under a nice, warm, normal blanket.

So somebody, please, explain the Snuggie to me.

Anonymous said…
Richard and my mom both have one and they love them. I sat next to Richard watching Glee on Wed. and it actually kept both of us very warm! The other boys want Santa to bring them one, too..
The funniest part of your whole post is that you, of all the cold people in the world, would become the Snuggie's biggest fan once you got one. You would be sitting on the couch with the kids all wantin' to get in your Snuggie and you would be sayin' "Get off me, get your own!"
20 November, 2009 19:22

Jen said…
Well, I scored a precursor to the Snuggie -- a quilted blanket made of microfiber "fur," backed in cotton, fitted with zippers and snaps -- at the thrift store last winter. I bought it thinking it was a sleeping bag one of the kids could use on the holiday tour of relatives' floors, but when I got it home and discovered the many snaps, I realized I'd uncovered the missing link between the blanket and the Snuggie. I don't wear it around the house, because the snaps aren't meant to withstand mobility. They are meant to grant access to your remote or book, and little else. BUT I certainly WOULD wear it around if I could. It is sooooo warm and soft. If it was a hooded sleeping bag with no arm holes, it would be perfection.
21 November, 2009 15:36

Kerri said…
I am kind of intrigued of the pub crawl in a snuggie. What do you think people would say if we started one down San Pablo Avenue...starting @ the Albatross and ending at the Mel-O-Dee? I think we would get our ass kicked by the end...
but, damn, we would sure be warm while holding a frosty drink.
23 November, 2009 15:24

And I'll Raise You 5 said…
Oh kerri, this made me laugh! Definitely ass-a-kicker-ata time.