The Natives Are Getting Restless

It's that time of year again, folks!  The time when Rick starts to obsess over our garden in anticipation of the annual garden tour we participate in.  It's a big deal.  First of all, our own garden is one of the stops on the tour.  Second of all, each year, some of the gardens Rick has designed are also on the tour: for 2012, there are two.  And third of all, the tour coordinator hires me each year to produce the booklet that every registrant receives; I'm on my 8th year of doing this project.  This 80-odd page guide contains descriptions of each garden, maps, lists of designers, lists of native plant nurseries, and various native plant resources.   If you've ever heard me refer to the one big project I work on each year, this is it: 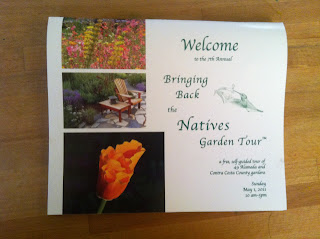 This is also the time of year that...

...Rick decides to take on some large scale project in the garden that most people would spend 2 months planning and 5 or 6 months implementing, giving us exactly 2.5 months to make it all happen.   He's got a few in mind for this year.  I listen, smile, nod, and make a mental note to stock up on the Prozac.

...the kids remember how much they hate the garden tour because they lose their parents for 3 months and because they hear far too much about mulch, gravel, vegetable beds, piles that need to be moved, and Eriogonoum umbellatum.  And Eschscholzia californica.  And no, that is not misspelled.  10 points to anyone who knows what that is without using Google.

...we lose entire days off of our lives when we spend hours upon hours tidying up and arranging one area of the garden just so, only to return a few days later and find one of Tallulah's "pirate ships" or one of Vincenzo's teepees has sprung up like magic, causing our blood pressure to immediately spike, our panic buttons to all go berserk simultaneously, and our vocal cords to seize up rendering us speechless, which is good because otherwise we would scream ourselves hoarse anyway.

Tallulah builds her pirate ships by creating a random placement of crates, planks, flattened boxes, blankets, couch cushions if she can get away with it, and anything else she can find, and then stocking it with books, puzzles, stuffed animals, and dishes.  Sometimes she covers the whole shebang with multiple blankets draped across our courtyard.  It looks like the encampment of a crazy person when she's through.  Which, in a way, I guess it kind of is.


Vincenzo's teepees are decidedly more palatable, and yet -- still heart stoppingly frustrating when we are trying to get things "show ready."

We will come up for air at various points between now and May 6th.  At least one time when I've sent the garden guide off to the printer (March 9th) and at least a couple of times to eat and throw food at the other kind of natives we are responsible for, several times to enjoy a Guinness, one time in early April to shake our fists at the heavens and curse ourselves for saying "sure, we'll do this again!" and once or twice to drive the kids to something soccer-related.

It's that time of year again, for our annual California natives roller coaster.

The tour is wonderful.  Bringing Back the Natives.  Click through and register to attend.  There will be no same-day registration this year, so reserve your spot early!

And I'll Raise You 5 said…
WME, we love the teepees too...so we make sure there is a place for one. When they pop up in super inconvenient places it's a little crazy. We also let Little T create a little outdoor house/tea party space, and it and the teepee are always among the most popular parts of the tour. We also have an area of the garden that is lined with chalkboards for our kids and kids who come on the tour.