Obama Spoke To Me In a Dream Last Night

- July 23, 2011
Well, actually, he didn't, which is precisely the point.
We got iPhones a few months ago, and I have to admit, they are fairly miraculous. They have made many things easier and more fun, and I am thoroughly enjoying having one. But when my husband asked me the other day if I like my phone, I gave him the honest, if hard to admit, response: "I do like it, but I need to have a different relationship with it."
Apparently, Obama and my subconscious agree.
Last night, I dreamt that I was watching my daughter play in a soccer game against a team on which played one of the Obama girls. This was the coolest thing ever! There we were, on a great expanse of green grass, on a lovely sunny day, watching girls play the Beautiful Game, and there was Mr. President, looking casual, jaunty and charming, watching his daughter as well.
I was so excited! I might get to talk to him, to shake his hand, to ask him why John Boehner is such a tool!
But first, I thought, I have got to Facebook this!
So I stepped away from the field for a moment to try to compose some super witty post about Obama and me hanging out, but my phone was being testy, and the Facebook ap was being weird, and I couldn't get the post to go up. It was supremely frustrating. I tried for awhile, editing my thoughts, trying to come up with the best little phrase to capture the moment...and the ap was failing me big time.
Forget it, I thought. I can either post about being here with Obama, or I can go hang out with Obama. I'm opting for the latter! But as I turned back to the field and the other parents watching the game, I saw his motorcade pulling away. He had to leave before the end of the game (maybe to go over to Home Depot to find a new color of paint for the debt ceiling, since it seems like we might be stuck with the one we have). I watched him drive away and felt like such a fool for missing my chance.
Gone. Gone. I didn't get to talk to the Leader of the Free World, because I had my stupid nose stuck in my stupid iPhone, trying to compose some stupid FB post. Stupid is as stupid does.
If I had one of these, I'd have to edit it... 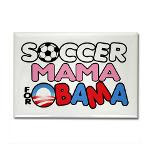 ...to say Soccer Mama missed Obama.
So yes, I need a different relationship with my iPhone. Clearly, it's getting in the way of some IRL moments. Obama may not be in my living room, but six other people are, and they might just be more important in my little sphere of existence.
At least I don't need a professional to interpret this one for me.
* * *
dreams Facebook Obama

Suburban Correspondent said…
That definitely sounds like the sort of dream I would have!
24 July, 2011 11:46

Kristin said…
Ye-siree. I agree. They're a useful but scary tool taking away our attention. We aren't noticing what's going on and engaging with the people and the living things around us, not only our families, but nature as well. Just make a limit for yourself and you'll be fine.
24 July, 2011 16:24