1. As I was leaving my daughters' room this evening after putting them to bed, my five year old yelled, "I don't like you!" and the three year old chimed in, "Neither do I!" What a lovely way to start the kid-free portion of my evening. I must be doing something right.

OK, I did make them mad right before departing, but this was AFTER a good 10 minutes of kisses and cuddles and squeezes and I love yous and all manner of cute nonsense. It was also after my parting shot, which was: "You MUST stay in your beds tonight, I do NOT want to put you to bed multiple times!"

2. I saw a sign today that said HAVE A GREAT DAY! IT'S UP TO YOU! I wanted to slam into it with my mini-van. I'm all for a positive outlook, but sometimes, there are forces out of my control, such as a three year old who picks the last possible minute before the family has to leave the house before filling her underwear with stuff that definitely shouldn't be there or an eleven year old who picks the last possible minute to realize that he doesn't actually like the shorts he's wearing and do I know where his blue ones with the white stripes are or a five year old who can't find her shoes but CAN find the wherewithal to writhe on the kitchen floor in lost-shoe-agony until I carve out five seconds to walk in her room and see her shoes RIGHT NEXT TO HER BED IN PLAIN SIGHT.

Sure, I can have a great day. Someone needs to tell my kids that I deserve one and they better get with the program.

3. The other day, my son created an elaborate machine works contraption in his room. He rigged up a xylophone, propped at an angle against a tall building block, down which he slid a mason jar full of rocks, so that the jar hit a video cassette, which then hit a rubber duck, which moved forward and knocked over a book standing on his desk, which hit a series of square blocks set up like dominoes, the last of which fell off of his desk and into a box on his bed, landed on a ramp in the box, slid down the ramp and ran into a pair of scissors that were set up JUST SO, with a piece of ribbon laid between its blades. While the end of the ribbon lay across the scissors, the rest of it wound all the way up to the ceiling. Just before reaching the ceiling, a small pencil was tied into the ribbon, with the end of the ribbon taped very lightly to the ceiling.

The object of this whole project was to get the pencil to fall on the floor by sliding the mason jar down the xylophone. If everything went as planned, the scissors would cut the ribbon and the pencil would fall.

It took him about 12 tries, but it finally worked, and I got to witness it. It was awesome. Oh, and he wouldn't let me take a picture. PTHPT to him.

4. The only reason the machine work contraption was possible, and the only reason I found my daughter's shoes in five seconds, is that THE KIDS CLEANED THEIR ROOMS ON SUNDAY. Earth, commence spinning once more. Netherworld, stoke those fires, to thaw the recent freeze.

Bribing them that they would get to go to a movie if their rooms were clean did the trick. I haven't seen the floors in those two rooms in weeks. It's nice to have them back.

5. Have your kids seen the Diary of a Wimpy Kid movie? Oh, I highly recommend that they do! My kids saw it, and the best part was that my husband took them, giving me 2+ hours in my house with only my youngest daughter, and I got so much done. That's what I call a GREAT movie. I LOVED it, without having to see it!

6. I am trying to go to bed earlier, so that I can get more sleep. I am truly amazed at how hard this is. My younger kids go to bed between 8 and 8:30, my older ones sometime between 8:30 and 10:00. We're flexible like that. Everyone sleeps through the night. We succeeded in kicking strays out of our bed in the middle of the night. I could potentially be getting more sleep than I've gotten in years. 11.5 of them, to be exact.

But I don't. I don't put myself in bed. I stay up way too late, often watching stupid television, sometimes working on a freelance project, sometimes blogging or surfing the net. Occasionally reading The New Yorker. Or sometimes, like tonight, I go to bed too late, and then, have so much on my mind that I wake at 2:30 in the morning and can't go back to sleep, so I creep down to the kitchen and drink multiple cups of tea and surf blogs and get ideas and decide what is wrong with my parenting style and resolve to get the damn chore chart in place and operational...and do many, many other things less important than sleeping.

I always think that I can't afford to sleep because I will be so far behind tomorrow if I don't get more laundry folded (my watching stupid tv activity) or if I don't do one of the things nagging me from my to-do list. I am fairly certain that starting the day with enough sleep under my belt might do as much, if not more, for my productivity level, but I can't convince my body to rest when it's time to rest.

What is up with that? Why do we resist doing things that we know will be good for us? Truly one of the great mysteries of life. Please, share any wisdom you have on this topic. Because I like to read your comments after my kids have gone to bed.

7. And I conclude today's post by stealing a quote from Conversion Diary, the host of 7 Quick Takes Friday, because I have been thinking lately about how to teach my children to consider other people's feelings and thoughts more and also about how to let go of my own self-interest. This one is a beauty from Thomas Merton:

To consider persons and events and situations only in the light of their effect upon myself is to live on the doorstep of hell.

Put that in your pipe and smoke it. Or, just ponder it for a moment.

Happy Friday to all.

Viv said…
I put my kids to work, picking up in the bedrooms yesterday. There are still areas of floor that I can't see. *sigh*

Teacher Mommy said…
Okay. I think I'll ponder it, though, because I'm not all that into smoking.

Homemaker Man said…
I sat up the other night watching office reruns that I had already seen and thinking about what to write in my blog. Bad news. Your son sounds brilliant, btw.
16 April, 2010 07:04

Heather said…
Freakin laugh out loud funny Monica! I particulary enjoyed the writhing-on-floor-rather-than-find-shoe moment. Boy do I know that one well.
16 April, 2010 13:31

Jennifer @ Conversion Diary said…
Isn't that quote awesome? I keep thinking of it too.

- February 02, 2010
This week is Catholic Schools Week, the annual celebration of Catholic education that involves lots of activities and events and whatnot. The whatnot is going to kill me. Tomorrow? Here's what I need to coordinate. This is AFTER attending the K-4th grade pizza night fundraiser tonight and BEFORE attending the 5th-8th grade pizza night fundraiser tomorrow night. In between: My 2nd grader has an Ancestor project due tomorrow. We started it way ahead of time. And then left it alone, so she must finish it tonight. I am her subject, so I'm pretty involved. Tomorrow is Stuffed Animal Day. I don't even want to get started on my real opinion of Stuffed Animal Day. I'll just say it drives me bonkers. Tomorrow is the Multicultural Pot Luck. This means FOUR dishes, for FOUR class potlucks. And I can't convince the kids to let me throw four heads of cabbage in their back packs and call it a day. Tomorrow is the 100th day of school, which Kindergarten celebrates
Read more

She Makes Me Happy. And Tired.

Good Lord.  Yesterday nearly did me in. Some of you may know we got a dog for Christmas, 2018.  Ever since losing our beloved black lab, Tule, on Mother's Day 2017, most of our family has been lobbying hard for another dog.  I was the lone holdout, so when I -- as the mom and all around boss (sorry, hon) -- decided we were ready, we were finally ready. This was that special moment: Zuzu is now a little over a year old, and she is adorable and awesome and so much fun and...problematic. We take her for hour-long off-leash walks, where she frolics like a maniac with other dogs, as often as we can, and it's not enough.  She needs more.  When we got her, the people selling her told us she is part black lab, part Australian Shepard.  This may or may not be true, but she is 100% pure energy, plus another 35% neurosis.  She's a hot mess most of the time.  All that puppy energy, plus a couple of breeds with high activity quotients means we basically adopted a full-time j
Read more 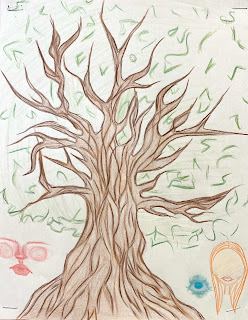 My daughter Tallulah is our guest writer today! Please enjoy this poem she wrote last November, as well as the art she made to go with it. I AM FROM by Tallulah Alatorre I am from long days in the yard lost in my imagination. I am from a minivan stuffed full with 5 whirly children and two exhausted parents. I am from the sound of NPR echoing in the halls on Sunday morning. I am from apples and peanut butter served on a smooth wooden cutting board. I am from trips to the beach with hot cocoa. I am from hikes and creek explorations. I am from long nights spent on a soccer field with the feel of an icy chill on my face. I am from the evening sun hitting the yellowish walls of my home, illuminating the living room. I am from the warm sweet smell of dinner preparing in the oven. I am from walks to the corner store and soccer tennis at the park. I am from hand-me-downs and everything used and loved before me. I am from the crackling of the fireplace during winter time. I am from doing my hom
Read more

THE 5 I AM RAISING

Making Me Dizzy In More Ways Than One

Please do not reproduce, publish or use photographs from this blog or reprint my words without my permission. Want something? Just talk to me. Thank you.