The Ability to Make Me Laugh

Tonight I was helping Samuel review definitions for his vocabulary test, and we came to the word flexible.

He got the general sense of the word and I could tell he understood it, but his answer was a little vague; I've been trying work with him to be very specific in his definitions. (If you write "a base" for the word foundation, how is your teacher going to know you mean a base on which something rests and not a base on a baseball field?)

So I was sort of trying to prompt him and coax him to use the word 'bend' in his answer. He stumbled on to it, and in the middle of making dinner and feeding the dog and pouring myself a glass of wine, I sort of lost my ability to speak. So in order to encourage him and tell him he was right, I touched my nose and pointed at him a few times in succession.

He looked at me funny and said: "The ability to smell?"

And now, I present a little photographic proof that Easter was only traumatic for the grown ups: 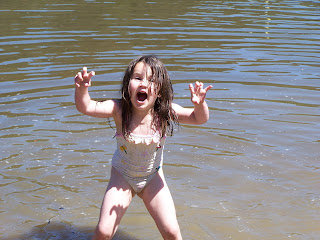