- April 08, 2011
This past Friday, the boys and I listened to a radio show marking the 43rd anniversary of the assassination of Martin Luther King, Jr. (If you are interested, you can find a link to the show here.) The program aired on the anniversary, this past Monday, April 4th.
Before you get all impressed that my kids listen to public radio, let me tell you that for the entire 15 minutes we listened to the podcast, they made goofy faces at each other, scowled at me, tickled each other, poked each other, asked random unrelated questions, and plotted their wii time. All those shenanigans had their intended effect and I set the boys free to terrorize their sisters rather sooner than I had hoped. (A maternal twist on a tired platitude: If you love someone, set them free and watch them wreck havoc all over your house.) (The grammatical issues in that sentence disturb me, but if I correct them, I lose the familiarity of the platitude. Such a dilemma.)
But I, for one, am glad we listened. We heard a couple of clips from King's speech to the Memphis sanitation workers during their historic strike of 1968. One of the guests was a retired sanitation worker, a man who participated in the strike and who brought his wife and three small children to listen to King speak on April 3. It was especially riveting to listen to his first hand account of being at the speech. We listened, and then we did some talkin'.
We talked about the labor movement, then and now. We talked about the dignity of work, whether you are a garbage collector, a doctor, a janitor, the President of the United States, or a stay at home mom.
We talked about language, and how language can be an agent of history. Another man, with the same passionate belief in equal rights and social justice but without the oratory skills of King, would not have been able to lead the Civil Rights Movement with the same success. Words make a difference; words change history.
We talked about why a boy might feel the need to prod his brother in the butt with a big toe while I'm attempting to share important cultural history with them.
We talked about why their little sisters are so annoying and why slamming the door in their sisters' faces is not the wisest response to how annoying the little cutie-pies can be.
We talked about how King almost predicted his own death, the very day before he was gunned down on a hotel balcony.
For several seconds, we talked about nothing, because I was too busy holding my head in my hands and asking God to smite my children for goofing off.
And we talked about King as a preacher, a man for whom civil rights were simply human rights conferred by a God who created and loves each and every person, no matter what.
It was perhaps the most important 15 minutes of my week. Maybe not theirs, but mine. And to ensure that they remember at least one small thing, I made this poster and hung it in our kitchen. 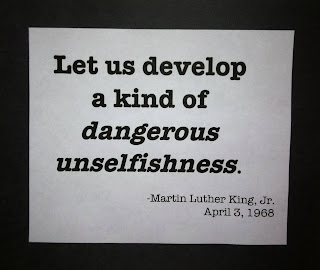 Dangerous unselfishness. Standing up for someone else, when I don't stand to gain from it, when doing so is risky. A powerful idea. And a Christian one. King goes on to say:

That's the question King wanted people to ask themselves in 1968. And that's the question I want my kids to ask themselves over and over again as they become adults.
Instead, all I'm really getting from them is their somewhat irreverent mimicry of King's speech style every time they walk past that poster in my kitchen. Who does that? Who mimics MLK for a laugh? My kids, apparently. Horrifying.
Oh well. Hopefully, the exposure alone will be good for them.
* * *
Head-Popping List history homeschooling human rights

Sandy said…
Monica, I was trying to find a quote by Jean Kerr that explained how just dropping words and forcing participation does eventually work but this lady did it so much better.

And I'll Raise You 5 said…
Sandy, thanks for sending this link. I had not heard of Jean Kerr, and now I'm glad I have! Great article about exposing kids to good stuff. Thanks!