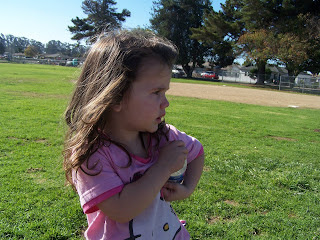 I went to the grocery store tonight, because dinner was, well...waffles...and we were out of powdered sugar. (What? You've never had pizza for breakfast?) We've been out of powdered sugar for a long time, and more than a few folks in our house prefer this confection to syrup on their griddle cakes. Powdered sugar is the one thing I keep forgetting to put on my grocery list, and we've been suffering without it. So when Rick said he would make waffles for dinner, he had a condition: Get Thee To The Store and Come Back With Powdered Sugar. And fruit shake makings. OK, I decided that was a fair deal. I took Elizabeth with me. The waffle iron was already hot, and the batter was ready, so this had to be a fast trip.

Not TOO fast, of course; after all, one moving violation a day is enough, and I've already had a chance to chat with Johnny Law today after "not coming to a complete stop" or some such nonsense. With all five kiddos in the car. Being stopped by the police was fascinating to them, a real adventure. The boys had a bit of fun tormenting Elizabeth by telling her the policeman was going to take her away if she took her arms out of her car seat straps. The policeman really got them going when he leaned slightly into the window, peered in the backseat, and asked if everyone was buckled up. That was cool. He still gave me a ticket for rolling through the stop sign but he mercifully did NOT give me the big fat $500 ticket for not having my proof of insurance with me. (I know, I know...)

But I digress. The grocery store run had to be fast: hungry waffle eaters were waiting. So I zipped over to the store, and in one motion jumped out of the car, opened the sliding door on the driver's side of the car, and hopped in to unbuckle Elizabeth. She, in her inimitable way, put both of her hands up, cocked her head to one side, and said: "Don't say hurry, mama, don't say hurry!"

This reminded me of my friend Nicole's musings on rushing our children through the day. Elizabeth provided me with today's reminder to stop and be in Advent. This should be a time of waiting, not rushing. A time of being present to each other, being presents for each other. So I slowly lifted her out of the car and hugged her tight. I stopped in the cold, dark parking lot, listened to the traffic whizzing by on the busy street, looked into the green eyes of my daughter and just waited. Not sure what I was waiting for, just for something to tell me that it was time to go into the store. That moment came, and off we went, Elizabeth bouncing on my hip, laughing and being silly. Don't say hurry, mama . . . Listen to me laugh, hold me tight, give me a minute of your day; don't say hurry.
Things Kids Say

Sandy said…
What a lovely moment your little one gave you! and thanks for the reminder that THIS is a season of waiting, of preparing.

Anonymous said…
This is so sweet! What a lovely moment to have with your daughter. And then to get powdered sugared waffles afterwards too! Glad I found your blog through literary mama :)
10 July, 2014 15:56

Karna, Blog Editor said…
Thanks for sharing your blog via the Literary Mama Facebook community. It looks like you have a busy busy family. Keep writing!
11 July, 2014 16:43