On Migraines and Laughter

- January 29, 2016
OK folks, I come roaring back to the blogging world with two things.

Come to think of it, there is no another kind of migraine.  They are all like that.

My kids know what to do when I get one of these: keep the house quiet.  But knowing what to do and being good at doing it are two very, very different things.  They mean well, of course, but their execution needs a bit of work.

Case in point.  This is a picture of the sign my daughter made for the rest of the family and propped up on my bedroom door last night: 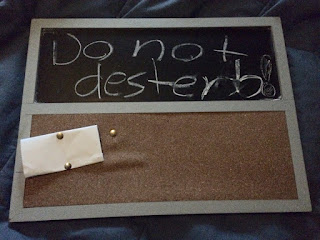 She propped it up on my door.  On a hard wood floor.  Where it kept sliding down and clattering on the floor, banging into the door on the way down.  Not to be deterred, she kept putting it back.  Roughly.  Noisily.  Slamming it against the door in an effort to make. it. stay.

I was, sad to say, sorely desterbed. 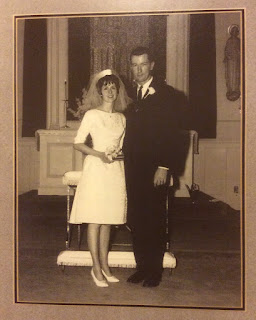 I'm willing to bet that the thing that has helped them last so long, perhaps more than anything else, is their great big, generous senses of humor, and their complete joy in things that make each other laugh.  Just yesterday, my dad remarked on how wonderful it is to see my mom laugh at the Frasier re-runs they've been watching for weeks now.  And even in my mother's current situation -- struggling with a vague diagnosis of dementia and unable to live in the home she loves -- she is still "killin' it," as the saying goes.  I asked her if she had any words of wisdom about how they have stayed married for so long.  Her instant reply: "Nope.  Just a lack of imagination."

There aren't words to describe the breadth and depth of delight I felt when she said that.  It was delightful, joyful, hopeful, hilarious…and just so completely her and them.  The past few years, we've all struggled with her not being able to be more herself.  And in an instant, there she was.

There is no lack of imagination there whatsoever.  So I guess they must really love each other.

Happy Anniversary Mom and Dad!  And thank you for all the laughter!

(Hmmm, note to self: make Rick laugh more and maybe he'll see this thing through!)
------------
Postscript: I had to edit this post after a dear friend and reader did the math. FIFTY ONE NOT SIXTY ONE!  I'd be embarrassed if I didn't have that migraine to blame...