That Omelet Doesn't Threaten Me

A Tip for Mothers. Or Fathers. Or People.


This is a public service announcement.  Probably kind of a long one.  But here it goes:

At least a year ago, a mom I know told me a story about the day her teenage son made himself an omelet.  She told the story to illustrate that he is more capable than she had previously imagined.  I'll admit it: I was impressed.  My teenage sons can barely make toast.  And there she was, waxing eloquent about the vegetable chopping, and the spice using, and the whisking, and the this and the that and the competency.

I won't go so far as to say that my confidence in my children -- or in my ability to raise them to be capable adults -- plummeted just from the story of the omelet.  But I do remember thinking: "Man, I wish my kids could do that."  And I've thought about that kid every now and then over the past year or so, especially when I make frittatas for my family, which I do with some frequency, giving me occasion to ponder the big questions: Will these boys ever know how to feed themselves?  Will their palates, and imaginations, and basic attitudes toward food ever move beyond Subway being the pinnacle of gastronomic delight?

Who the hell knows?

All I can be sure of is that that kid made an omelet.  It could have gone one of several different ways.  Herewith, I suggest just two:

Kid: I'm hungry.
Mom: Why don't you make yourself an omelet?
Kid: That's a great idea!  Do we have any dill weed? Fresh basil? Feta cheese?

Kid: I'm hungry.
Mom: Why don't you make yourself an omelet?
Kid: Phhht.

Kid: I'm hungry!
Mom: Why don't you make yourself an omelet?
Kid: Ugh! Whatever!  I'm not THAT hungry.

Kid: Gaawwwwd…I'm…so…hungry…I'm gonna die…ughgrrrrraaaaaghhhhh...
Mom: Why don't you make yourself an omelet?
Kid: FINE WHATEVER FINE JEEZ FINE.  Crap.  Where the hell is the frying pan thingee?  How do I do this anyway?  Do we have a flippy tool thing?  I can't BELIEVE you are making me do this.

See, just hearing that someone did something tells you NOTHING.  There are so many ways to do something: quietly, angrily, enthusiastically, peevishly, piously, deviously, pleasantly, like a teenager…the list goes on.  Let's go back to the kitchen for a moment, shall we?

Kid: Mom, do you want one?  I've got tomatoes, basil, feta, a little mozzarella if you prefer, I'm sautéing some onions first, adding a little garlic.  The kitchen smells fabulous!  Do we have any organic, whole wheat, HFCS-free bread I can toast to go with it?
Mom: Sure I'll have a small one, as long as you're offering.

Kid: (picture all of the following being said while the kid is using 10x the necessary number of dishes and utensils, dropping half the ingredients on the floor, and gyrating like a Woodstock attendee.) You mean I have to CHOP stuff?  Forget that.  Ewwwwwww: eggs are slimy and gross.  Do we have the cheese that's already shredded, cuz no way am I gonna use that flesh ripping thing you call a grater.  And by the way, we have barely enough salt: there's only like half a cup in that Morton's canister.  How do you flip this?  I can't flip this! This is fricking IMPOSSIBLE.  OH MY GOD THIS IS A MESS!  And everything's burning! UGH, NO WAY NO ONIONS.  Whatever.  This is stupid.  Why can't we just go to IHOP like normal people.
Mom: (She's actually pretty quiet.  The only thing you can hear, if you listen very hard, is barely audible weeping into a coffee cup spiked with whisky.)

The result in both scenarios: The kid makes an omelet.  Truth.

Here's the thing: that mom, the one who told me about her son making an omelet, if I were her, I am sure I would have told the story the exact same way.  The damn kid DID make an omelet, and to a mom or dad, that is MON-U-MEN-TAL.  A Scenario 2 mom gets to tell the story just like the Scenario 1 mom gets to, because in the end, it may not be pretty, but the omelet does get made, which is proof positive that someday the kid will be OK, or at least, that's what we are hoping like hell it means.

Also?  The good news, for all parents and other people out there, is that we get to narrate our own stories.  Every single one of them has a germ of truth in it.  Sing that song as loud as you want to. As soon as it starts to make someone else feel like crap, that germ of truth is dust, but until then?  GOLDEN.  Stories are meant to lift us up and show us what is possible, not prove how lame we are and how together everyone else is.  I don't begrudge my friend her omelet story, for two reasons. First, it shows me that I can tell my own stories, with their germs of truth, any way I want, and I can decide what those stories really mean.  And second, I celebrate the fact that on my good days, I can see beyond the halo cast by that story and realize the essential truth: kids grow up and learn how to make omelets and it isn't necessarily pretty along the way, but eventually, we won't have to make them frittatas.  Which reminds me of an image I saw recently: 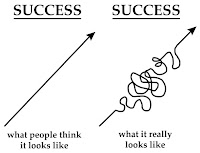 I heard the omelet story IRL, from an actual person.  But the reverberations of it -- the fact that I think of it sometimes when I'm yet again making frittatas for 14 and 16 year olds who can't boil water -- reminds me of the scourge of Facebook and the like.  I am 100% sure that while social media is keeping us connected to family and friends near and far and making all kinds of powerful social movements possible, it is also responsible for a crap ton of anxiety and neurosis, as we find ourselves staring at screens depicting in word and picture how wonderful and well-adjusted all of our friends' families are.

So.  Here's the public service announcement:


Tell your stories.  Don't let anyone else's bring you down.  See the germs of truth and let them inspire, not hen-peck, you.  The long road of raising children, of life, is not pretty, but there are fantastic views along the way and we get to frame the photos.

It doesn't hurt that just recently, the omelet maker got in trouble with his coach for coming to soccer practice high.

Nope.  Doesn't hurt at all.