The Price I'm Willing To Pay

- December 08, 2011
The other day a friend of ours brought 5 coca-cola cans over for my children.  He was dropping off a bunch of other stuff, and thoughtfully decided to include the sodas so that I could enjoy the resulting caffeine-induced frenzy: THANKS!

This was in the morning.  So of course, I didn't let anyone have a soda that early in the day.  And even though coca-cola cans look exactly alike, and even though it does not matter which one you get, my 5th born child decided that one particular can was definitely hers.   She wanted a label on hers while the cans chilled in the fridge.  She brought me a very small slip of paper and instructed me to write the following on it:


"No one drink this soda, because it's Tallulah's and if you drink it, then after I take it back and drink it I will hit you in the head with it."

She knows how to protect her own.

And no, she doesn't get that violent streak from me.  I am a peace-loving person.  And I don't even like soda.

But I do know, without a doubt, that this is one joyful, free, confident, irrepressible kid. 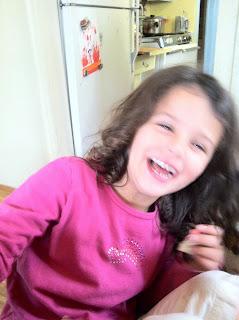 And I know I'm willing to put up with a lot in exchange for a joyful, free, confident, irrepressible kid.